This page collects information about the 2009 July 19 impact of an object on Jupiter.  It includes discovery and follow-on images, information about the status of proposals to observatories, and observing information.  Professionals and  amateur astronomers experienced in observing Jupiter are welcome to suggest additions to this page by contacting an editor.  Current editors include Joe Harrington, Amy Simon-Miller, and Heidi Hammel. 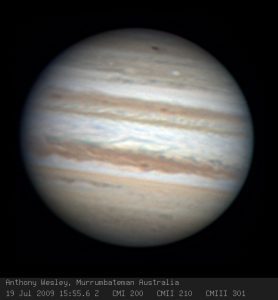 On 2009 July 19 at approximately 13:30 UTC, Anthony Wesley was observing Jupiter from his home observatory just outside Murrumbateman, New South Wales, Australia.  He noted a black mark in Jupiters South Polar Region (SPR).  This might be due to the impact of either an asteroid or comet – similar to the impacts of comet Shoemaker-Levy 9 in 1994.  Note that south is up in this image.

Next is a near-infrared image, taken in a weak methane-absorption band at 0.889 microns from Portugal by Antonio Cidadao.  It dates to 10 hours after the discovery.  It shows the impact as bright (meaning it is high in the atmosphere, unlike most tropospheric weather features).  Note that south is up in this image. 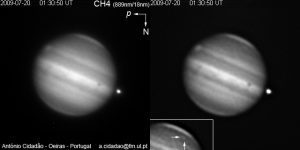 About 20 hours after the impact, Dr. Glenn Orton of the NASA Jet Propulsion Laboratory in Pasadena, California, was also observing Jupiter at NASA’s Infrared Telescope Facility on Mauna Kea, Hawaii.  He imaged the impact site in several infrared wavelengths as it rotated across the visible face of Jupiter.  There is a JPL press release containing one of his images.  His images are consistent with an impact interpretation, based on prior experience from the impacts of comet Shoemaker-Levy 9 exactly 15 years earlier.  Additional images from Glenn are on the private page, pending release clearance from JPL.  The private page is viewable to editors of this site only.  We will post these images as soon as we have permission to do so.

This list is meant to show others what proposals have been submitted to large facilities.  It is intented to prevent duplication of efforts with already submitted proposals.  We will continue to add to it, as information arrives (contact Joe Harrington, Amy Simon-Miller, or Heidi Hammel to add info).

In addition to DD proposals, many observers already had plans in the queue on some large telescope, including IRTF (PI: Orton), Keck (PI: de Pater) and others.  We would be happy to add your program, as well.

Some people have been asking to see the evolution of the SL9 sites, along with other mosaics from Hubble’s WFPC2.

HST global mosaics were generated by Amy Simon-Miller (contact her for further details); no attempt was made to perfect the color balance and cut-outs are where no lower-resolution wide field data exist.