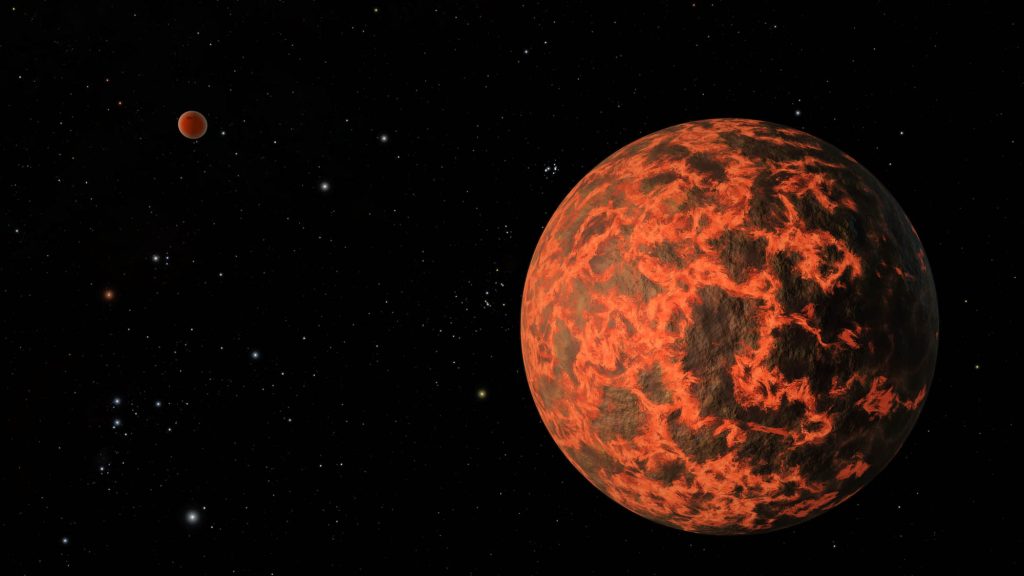 Magma World: Artist’s impression of UCF-1.01, an exoplanet candidate that is two-thirds the size of Earth.  The planet was found by UCF Planetary Sciences Graduate Student Kevin Stevenson in data he was analyzing from the Spitzer Space Telescope.  The background planet is the hot Neptune GJ 436b.  Because of its proximity to our solar system, the starfield shares many of our culture’s cosmic landmarks.  To the left, the constellation of Orion gleams, though in a distorted shape compared to our vantage point on Earth.  Courtesy NASA/JPL-Caltech.

The UCF Exoplanets Group is pleased to announce the discovery of two new transiting planet candidates (UCF-1.01 and UCF-1.02) orbiting the red-dwarf star GJ 436.  The objects are 2/3 the diameter of Earth, making them the closest rocky exoplanets and the only ones within 100 light years.  They were found by UCF Graduate Student Kevin Stevenson while he was analyzing Spitzer Space Telescope data for GJ 436b, a Neptune-sized planet in the same system. After identifying the orbital period of about 1.4 days for UCF-1.01 using three transits, Stevenson predicted a fourth transit.  UCF Prof. Joe Harrington, the group’s Principal Investigator, used the last of the group’s allotment of time on the Spitzer telescope to observe the fourth transit, which occurred very close to the predicted time.

Finding the transits is just the first of three discovery steps, however.  Stevenson led a team that analyzed data from the Canada-France-Hawaii Telescope in Hawaii and the Very Large Telescope in Chile to verify that the signals he was seeing were not caused by other astrophysical sources.  The team also analyzed a large number of high-precision measurements of the star’s wobble.  As expected for planets this small, no signal was present.  Since a measured mass is required for full-fledged planethood, we are cautiously calling them candidates, for now.  It may be some time before instruments sensitive enough to measure these small planets are developed.

UCF-1.01 and UCF-1.02 are the first sub-Earth-sized transiting planet candidates found without the aid of NASA’s Kepler spacecraft, and they are also Spitzer’s first exoplanet candidates. Kepler has been identifying thousands of potential planets outside our solar system, but of those, only a handful are smaller than the Earth and all are very distant from us.  If confirmed today, the new planets would be named GJ 436c and GJ 436d, respectively.

The Spitzer Space Telescope observed UCF-1.01 and UCF-1.02 while they passed in front of their parent star, as seen from Earth. This is known as a primary transit. The observed light from the parent star decreases by a tiny fraction when the planet passes in front of it, from which we can produce a light vs. time plot known as a lightcurve (shown on the left). The infrared space telescope made a total of four observations of UCF-1.01 with the 4.5 μm channel of Spitzer’s Infrared Array Camera (IRAC). The first hints of both planets were found serendipitously while making follow-up observations of GJ 436b. The lightcurves shown here are the key pieces of evidence that led to the discovery of UCF-1.01 and UCF-1.02.

UCF-1.01 is probably rocky like Earth and it is not likely to harbor life. The tiny planet orbits its star at a distance of 0.0185 AU, or roughly 50 times closer than Earth orbits the Sun. With a period of only ~1.4 days, UCF-1.01 has an estimated temperature of 860 K (1090° F). Due to its extreme proximity to GJ 436, any atmosphere that UCF-1.01 might have had has most likely escaped its weak gravity. This world might resemble a cratered, mostly geologically “dead” world in the manner of Mercury. Alternatively, tidal forces from GJ 436 might gravitationally deform UCF-1.01, heating it internally and triggering volcanoes similar to those on Jupiter’s moon Io. A third possibility is that the extreme heat of orbiting so close to GJ 436 has rendered the extrasolar planet’s surface molten.

The paper reporting these results is accepted at The Astrophysical Journal.  It will appear online at ApJ Thursday, 19 July 2012, but is currently available on arXiv.org.  There are press releases by UCF and Spitzer.