Dr. Charles Schambeau officially became the 17th PhD produced by the Planetary Science Group on Saturday August 4. Congratulations!  He will be taking up a position as a postdoctoral researcher at the Florida Space Institute.

“UCF planetary physicist Philip Metzger has been crowned one of space engineering’s rock stars by the American Society of Civil Engineers.” Read the whole story at UCF Today. Congrats to Dr. Metzger!

Our own Dan Britt has been named a Pegasus Professor! Congratulations! Story: https://today.ucf.edu/founders-day-honors-professors-commitment-to-students/ .

The National Science Foundation has approved UCF’s proposal to manage one of the world’s most iconic observatories, Arecibo Observatory in Puerto Rico. This is a very exciting development for UCF! Some press releases: UCF Today, COS News, NSF. 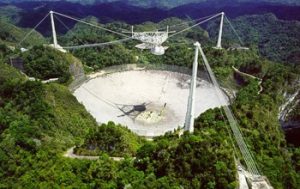 Credit: NAIC Arecibo Observatory, a facility of the NSF

In the early morning hours of January 21, 2017, many professional and amateur astronomers were pointing their telescopes to a star in the constellation Boötes (The Herdsman) with the unwieldy name of URAT1 533-182543, a typical star that had not inspired any special interest up until that very moment. So what happened on that day to place the star in the spotlight? For about 2 minutes, that star was occulted by Haumea, one of the largest icy bodies in the Solar System orbiting beyond Neptune, and a so-called “dwarf planet,” like Pluto.

Occultations have been used for decades to study details of many small bodies in the Solar System. Conceptually, they are just like total solar eclipses, when lucky witnesses on Earth see the Moon temporarily blot out the entire Sun. In that case, the observers are in the deepest part of the Moon’s shadow. In an occultation, instead of the Moon, there is an asteroid or other object, and instead of the Sun, there is a distant star. These occultations usually last just a few seconds or minutes, and so require careful planning to actually see. Most often, occultations are used to independently find the sizes and shapes of asteroids, properties that can be very difficult to determine otherwise. This is especially true with the very distant objects beyond Neptune, known as “trans-Neptunian objects,” or TNOs. Haumea, in addition to being a dwarf planet, is one of these TNOs.

Twelve telescopes at 10 different observatories around Europe managed to witness Haumea’s blockage of the star. But in addition to measuring Haumea’s properties, the observers saw something unexpected: Haumea has a ring! The discovery of the first ring system around a dwarf planet is a reminder that there are many fascinating worlds to explore in the outskirts of the Solar System.

Estela Fernández-Valenzuela, soon to be a post-doctoral researcher at the Florida Space Institute at UCF, participated in the Haumea occultation project and is a coauthor of this discovery.

“I worked in the planning of the observational campaign. A few days in advance of the phenomenon, we predicted that the shadow of this occultation was going to cross Europe, so we sent out an announcement and coordinated the observations. After the successful detection, I worked on modeling the effects that the ring has on the variation of Haumea’s brightness. This information is needed to determine the orientation of the rotation axis of the body.”

The group of researchers, led by José Luis Ortiz from the Instituto de Astrofísica de Andalucía, Spain, found that Haumea’s ring lies in the same plane as its equator and as the orbit of its outer moon, Hi’iaka. The ring has a radius of about 2,287 kilometers and a width of 70 km, lying at about 1,000 km from Haumea’s surface. They also found that Haumea is larger than previously estimated – its largest axis is about 2300 km long – and this implies that it is not as reflective or as dense as originally thought.

More details can be found in the Nature publication: “The size, shape, density and ring of the dwarf planet Haumea from a stellar occultation,” Nature 550, 219–223 (URL: http://www.nature.com/nature/journal/v550/n7675/full/nature24051.html?foxtrotcallback=true). A video with an artist’s conception of the Haumea system is also available (URL: https://youtu.be/TeUegAEbGxo).

This past summer, for the first time since 1918, people in the United States were able to experience a total solar eclipse that crossed the mainland from coast to coast. No total solar eclipse had even touched the continental United States since 1979, and we will have to wait until April 2024 for the next one. On August 21, 2017, the path of totality extended from Oregon to South Carolina. As you might expect of planetary scientists and astronomers, many UCF researchers from the Florida Space Institute and the Physics Department traveled around the USA to enjoy this rare spectacle. Read about some of their experiences at FSI’s website (URL https://fsi.ucf.edu/solar-eclipse-map/).

UCF will be hosting a solar eclipse viewing event on August 21. Check out the details on our website and on UCF Today.

June 30th is Asteroid Day, and our own Prof. Humberto Campins will be at the Kennedy Space Center to give a public talk about those rocks in the sky. Check out the story on UCF Today.

Check out the story on UCF Today about FSI Planetary Scientist Dr. Gal Sarid and a recent study of an unusual comet in the outer Solar System.

Dr. Addie Dove, an assistant professor in our group, has won this year’s Susan Mahan Niebur Early Career Award from NASA! Congratulations! The award will be formally presented at this summer’s Exploration Science Forum. Read more about the award and about Prof. Dove’s accomplishments at UCF Today.

An international collection of scientists who study asteroids, comets, and meteors met this week at the (appropriately named) Asteroids Comets Meteors 2017 conference in Montevideo, Uruguay. It is the most important such conference in the world for these researchers. A tradition at this approximately-triennial conference (first held in 1983) is to honor some of the researchers in the community by naming asteroids for them, and this year’s conference was no exception. Asteroid 10689, a.k.a. 1981 DZ1, is now officially named Pinillaalonso in honor of UCF’s very own Dr. Noemí Pinilla-Alonso, a planetary astronomer here at the Florida Space Institute. Additionally, asteroid 10282, a.k.a. 1981 ET46, is now officially named Emilykramer in honor of Dr. Emily Kramer, a scientist at Caltech/JPL who earned her Ph.D. at UCF in our group in 2014. Both asteroids are in the Main Asteroid Belt between Mars and Jupiter. Pinillaalonso is about 13 to 14 kilometers in diameter; Emilykramer is about 2 to 4 kilometers in diameter.

Drs. Pinilla-Alonso and Kramer join a few other faculty at UCF — Drs. Britt, Campins, Fernández, Lugo, and Harrington — who have been similarly honored with asteroid names. In total, over a dozen current and former UCF personnel have been so honored.

A profile of one of our own professors, Dr. Addie Dove, is included in the Center for Success of Women Faculty‘s celebration of Women’s History Month! Give it a read!

A recent paper published by UCF researchers Leos Pohl and Prof. Dan Britt discussing how asteroid clays could work better than aluminum at protecting astronauts in deep space from radiation has been profiled in a recent article in New Scientist.

We’ve updated our website into a format that we hope will improve the user experience, ease navigation, and align better with UCF’s colors. Over the next few weeks we will be making sure our content is updated and that it has all ported over to this new site!